In a few days (on April 20th 2021), we will launch a new game project on Kickstarter: It’s a Wonderful Kingdom ! A 1 to 2-player game by Frédéric Guérard, illustrated by Anthony Wolff. This game takes place in the “It’s a Wonderful” range of games, the first title being “It’s a Wonderful World”. But it’s a brand new stand alone game: even if in direct line of descent with his elders, it brings very different and new feelings. It’s a full new experience specially thought and designed for 1 or 2 players.

Every module shown underneath can be played  solo or at 2 players. 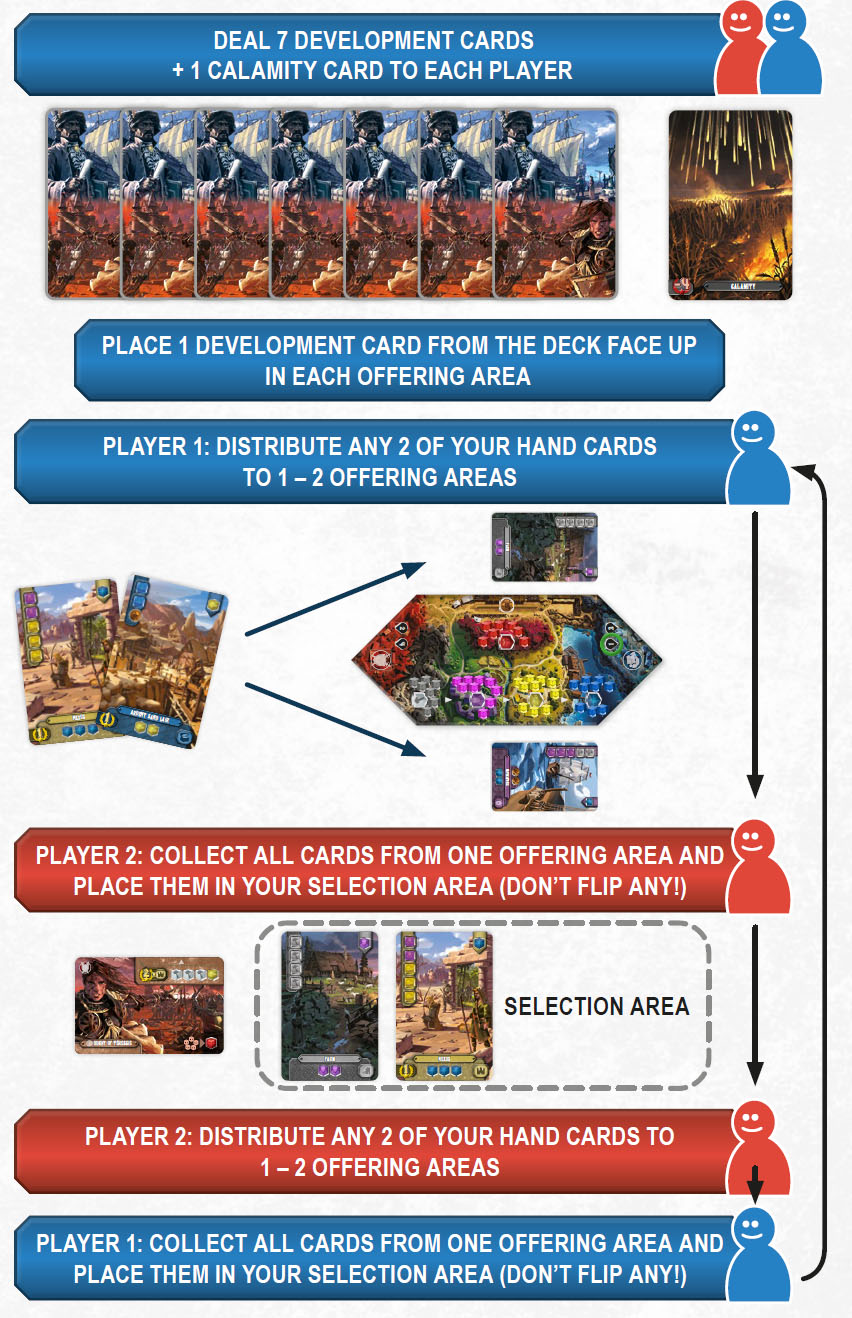 One particularity is the new game system called “Split & Trap” which allows to create tension, depth, and a lot of strategy in the way you’ll divide the cards up between the players each turn. One after the other, players will place cards from their hands on one of the two Offering Areas, in the center of the table, and the opponent will have to collect the whole content of one of the areas. This system is based on the “I cut, You choose” mechanism.

In this system, each player will have the possibility to use Trap tokens that will allow them to place some cards face down. This way, you’ll try to lure your opponent into taking negative cards (such as Calamities for instance) while attempting to protect the cards you really want to collect !

Apart from that, the game will reintroduce the Planification and the “Sequential Production” systems that made the success and the quality of the “It’s a Wonderful” brand. If you need some more details on these mechanisms, you can have a look at the It’s a Wonderful World rules. 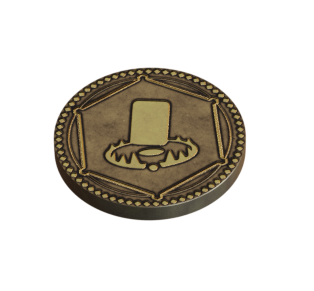 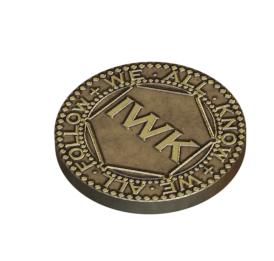 Another special thing with It’s a Wonderful Kingdom is the modularity. Each and every time you play, you’ll have to choose one of the modules contained in the game in order to slightly modify the rules. Each module adds some parts to the game or replaces some of them. Some modules give more interaction, others are more deeply strategic: you’ll have to adapt to these changes.

In the core box, you’ll find 3 modules : Menace, Advisors, Quests. A 4th module, Conquest, will only be  available in the Legends box on Kickstarter (initially).

In this Module, each player will play one of the available Menace packs. Menaces are negative cards that handicap or slow down the player who collects them. They’ll remain active until the concerned player decides, if able, to send his soldiers defeat them.

Each Menace Pack has different powers and effects. This way, as players will play different packs, games with this module will be asymmetrical, and you’ll be able to create new oppositions each time.

In the core box, you’ll find 4 Menace packs (Giant rats, Frost Giants, Shadows, Thieves). There will also be an exclusive 5th pack in the Legends box: The sisters of Misery. But it might be possible that the Kickstarter campaign holds other surprises … 😉 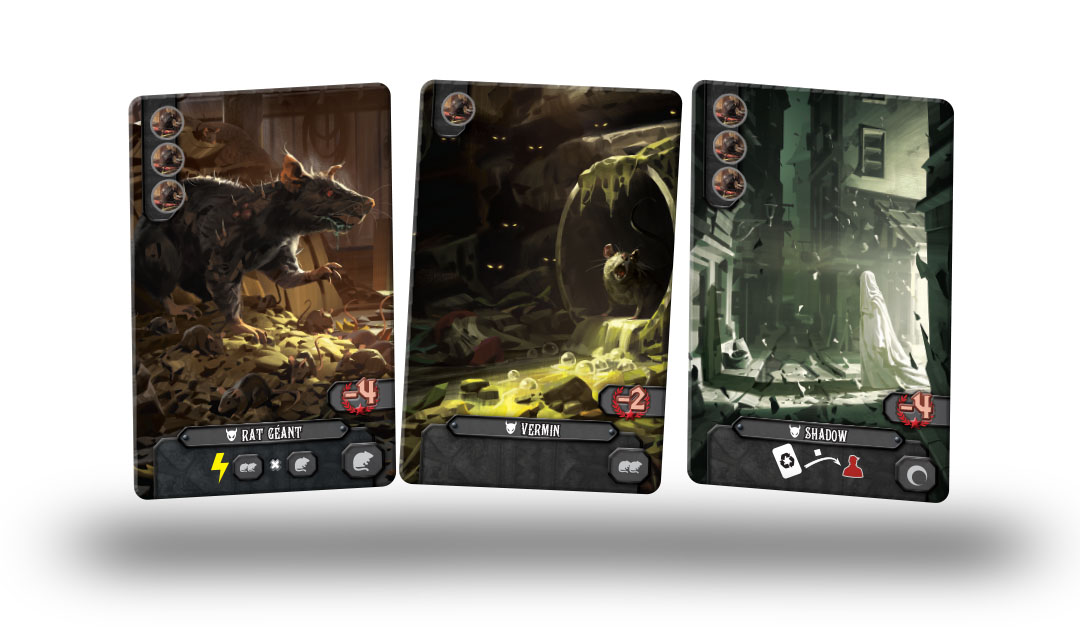 The Advisors Module will allow the players to use the unique powers of 14 different advisors each game. These powers can slightly change the way the cards are split, modify some scoring, or help your production. When you pick an advisor card, it goes straight next to your Duchy card in the advisors area. Once placed there, its power can immediately be activated. This way you can use an advisor during the same turn you collected it. Most of the powers are activated using Soldier tokens and can only be used once per round.

Consequently, you’ll have to handle your ressources well, to be able to use the powerful advisors’ abilities at the right time! 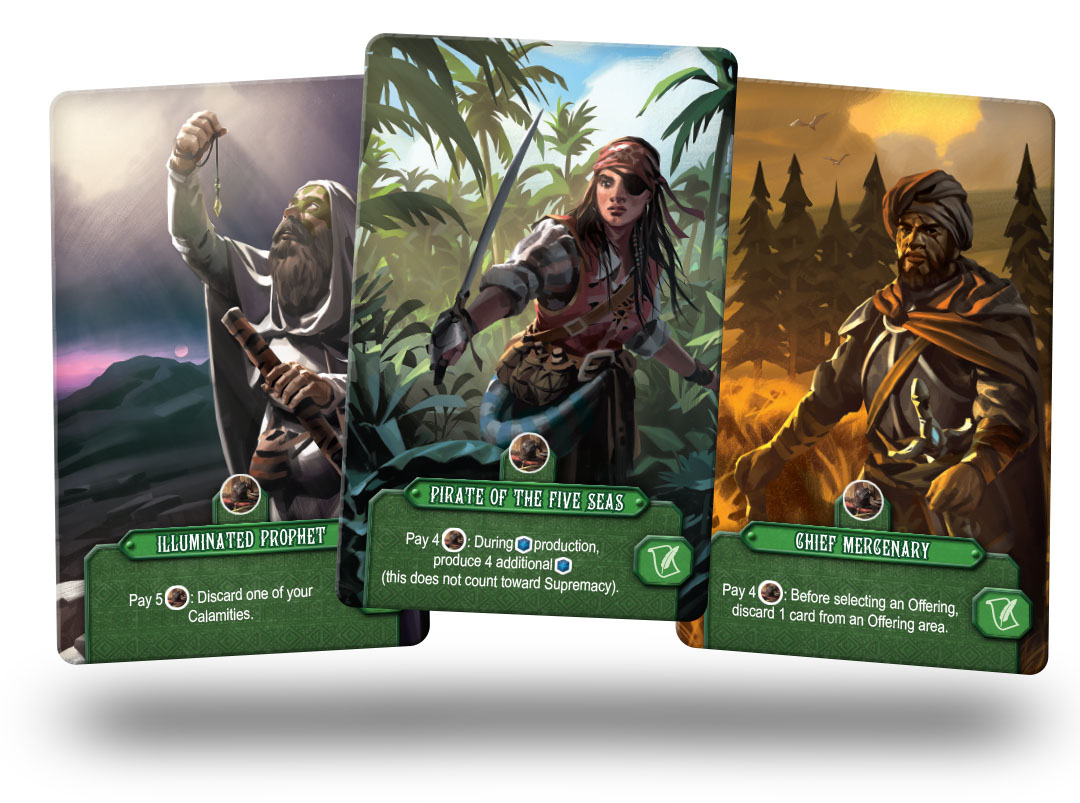 The quests will add a small board on the center of the table, introducing objectives for both players. This board offers several possibilities to the players, depending on the quest’s theme. There are 3 facultative steps, and a final one. Each step has a proper cost or completing condition, and a reward in exchange. Both players are able to complete the steps as they individually wish, in the order they choose to, but only once per game.

In order to claim victory, the players will have to complete the final step of the quest before the game ends. If someone doesn’t fill this condition, they will automatically be declared looser of the game. If both players failed in this quest, they both loose the game (and the Kingdom falls appart into Misery ^^). 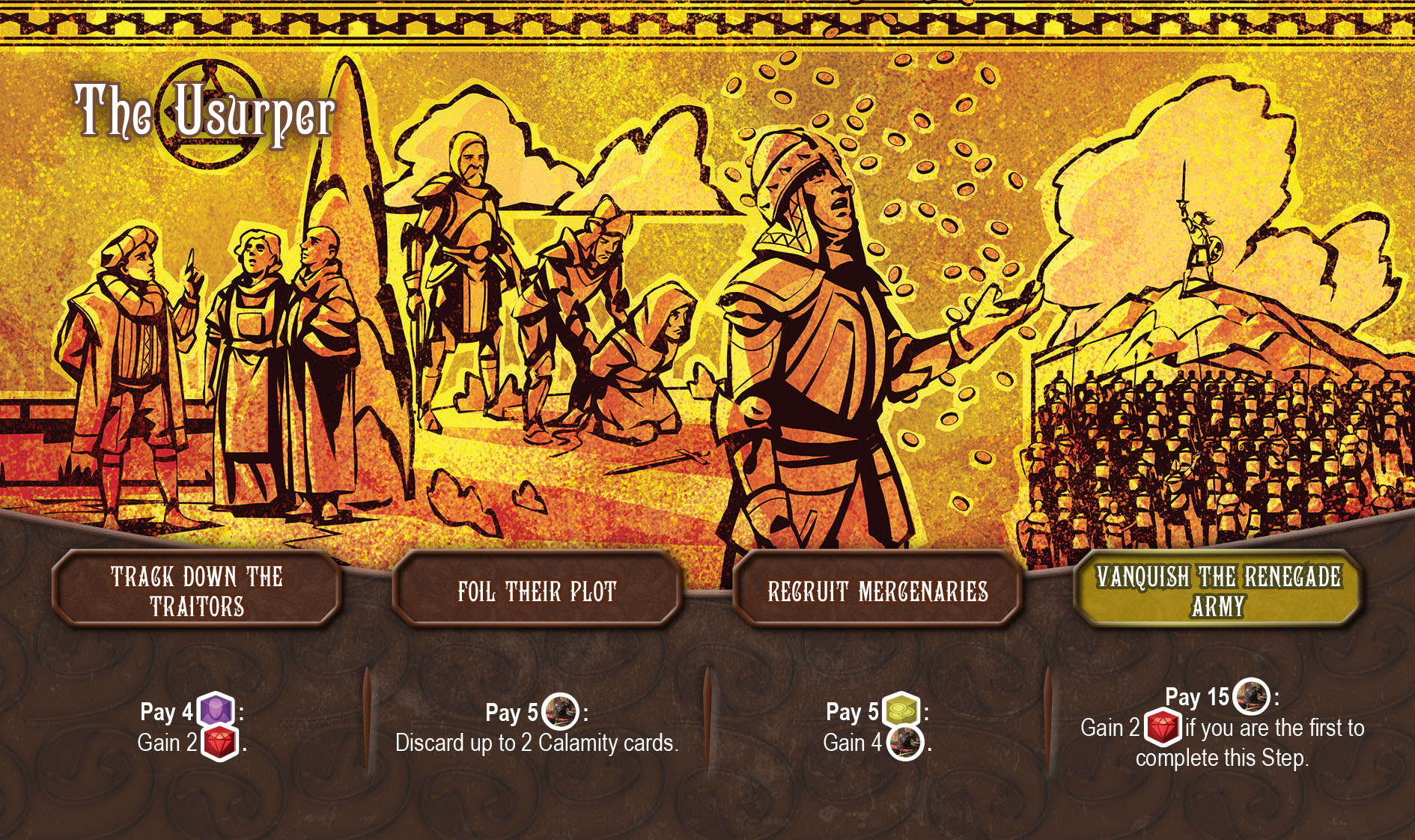 This Module will only be available in the Legends box. It allows the players to participate in a territory conquest on a new Board. Each player will lead Knights, that they will use to take control of some territories. Each territory will enhance production or grant powers for the player who owns it.

At the end of the game, each controlled territory will provide victory points. You’ll have to be careful with your opponent invading your lands, but also use the conquest to develop and take advantage ! 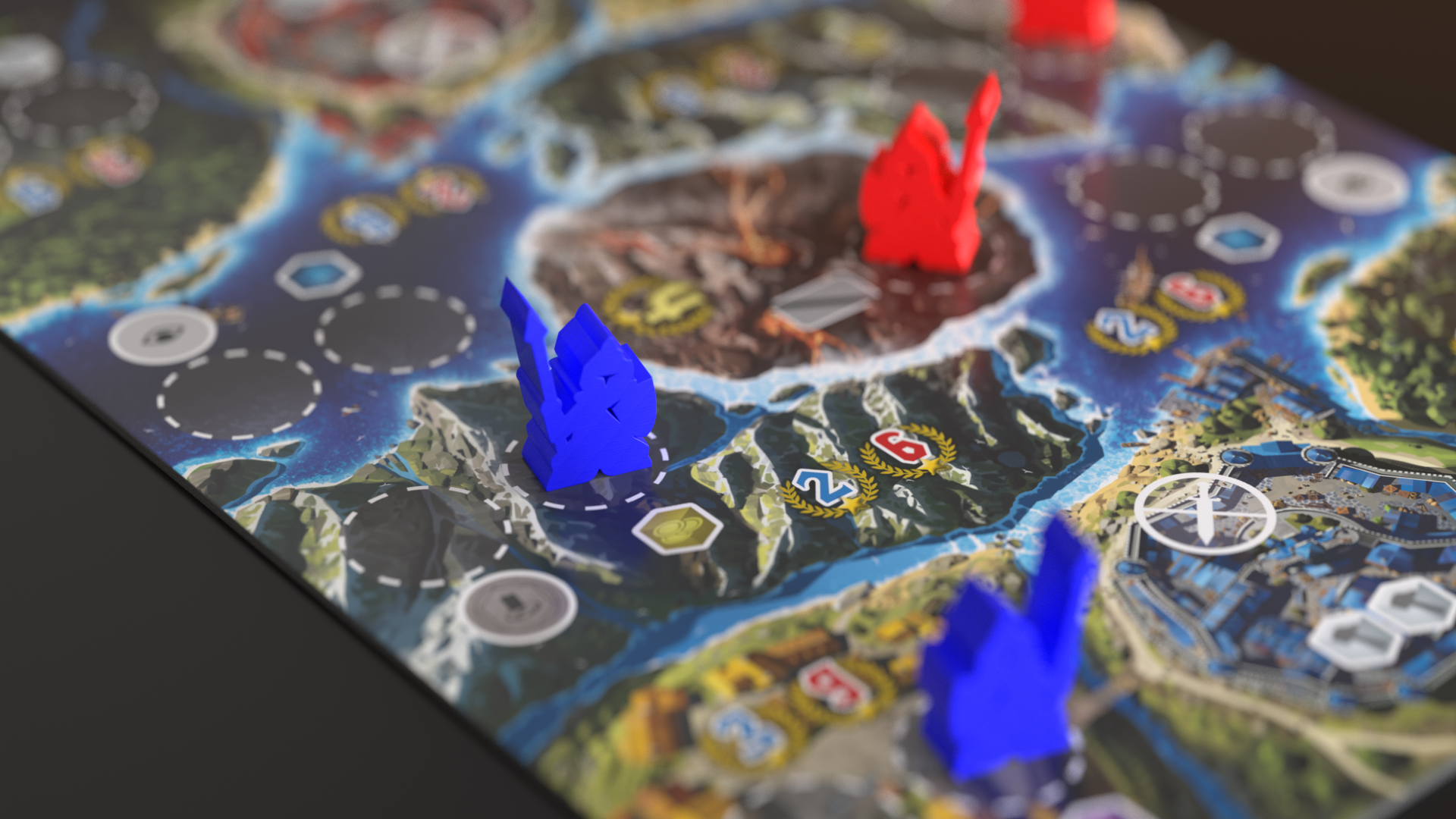 The Kickstarter campaign will start on April 20th 2021, 8:00pm (GMT+2) and will introduce a lot of surprises we didn’t talk about yet !
We are counting on you !

It’s a Wonderful Kingdom – A quick discovery
We use cookies on our website to give you the most relevant experience by remembering your preferences and repeat visits. By clicking “Accept All”, you consent to the use of ALL the cookies. However, you may visit "Cookie Settings" to provide a controlled consent.
Cookie SettingsAccept All
Manage consent