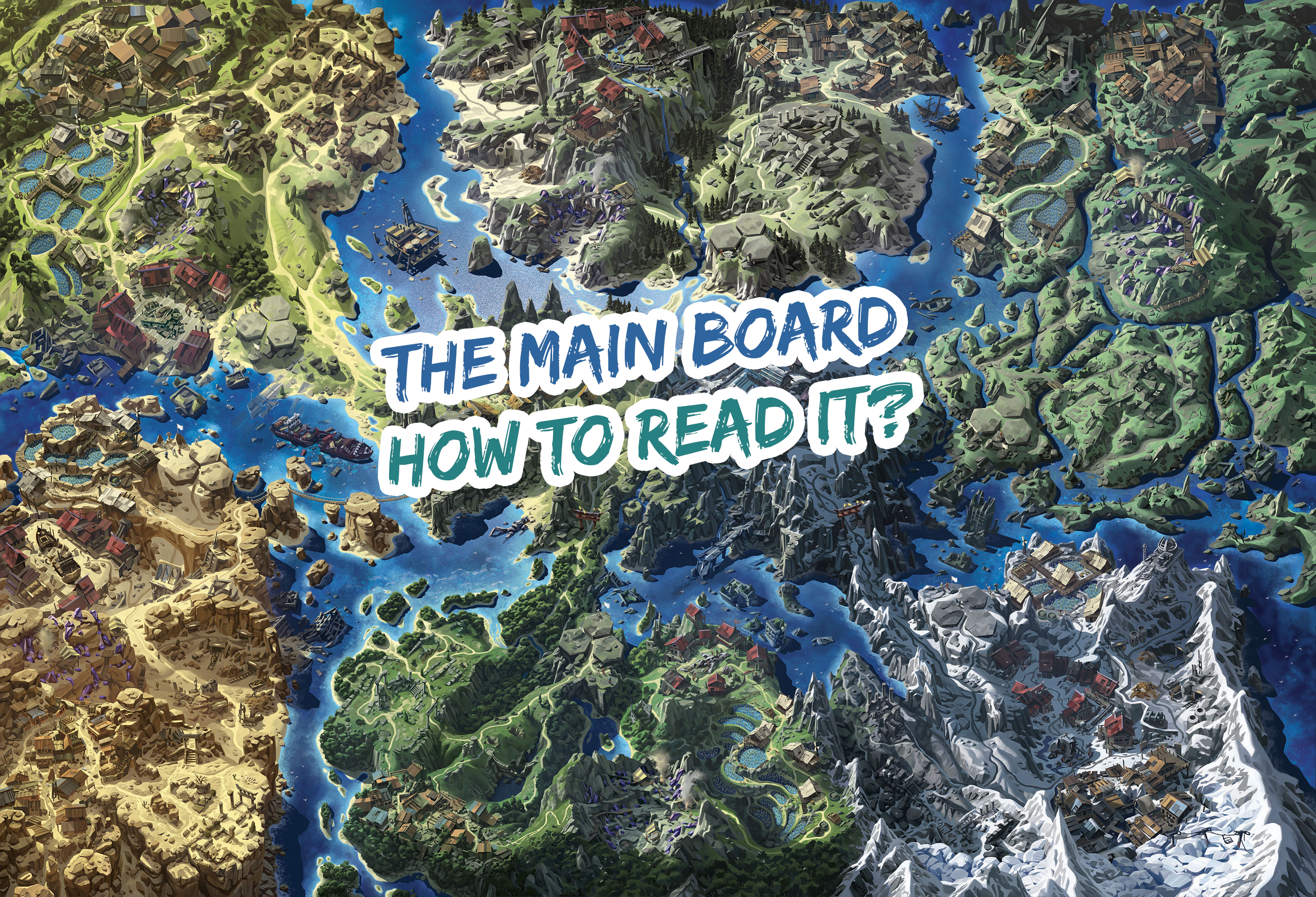 This is the third article of the “Tactical guide” of Daimyo (get the first article right here and the second one there). In this one, I write about the main board of Daimyo.

Reminder: Daimyo is designed by Jérémy Ducret, illustrated by Dimitri Chappuis and Anthony Wolff and published by La Boite de jeu. Daimyo is a game of Dice Drafting, Majority of Influence and Resources Management.

Many years after a disaster that decimated most of mankind, some survivors, organized in clans, started a new civilization based on a misinterpretation of the Bushido codes. In this uchrony, combining lost technology and waste materials, you play as a so-called Daimyo who craves to be the new Emperor of the Archipelago of 6. Popularity has replaced honor and every Clan aims to become the most popular to rule the Archipelago.

Daimyo will be launched on Kickstarter from the 16th of July to the 30th of July 2020.

Thus far, I explained some mechanisms of Daimyo but did not speak about the goal of the game. When playing Daimyo, you’ll try to become the new Emperor of the Archipelago of 6.  There is no lineage or inheritance involved, no brother or cousin to dethrone, no revolution to lead. To become the new Emperor you’ll have to be the most popular. The King of the bling-bling of the whole area! 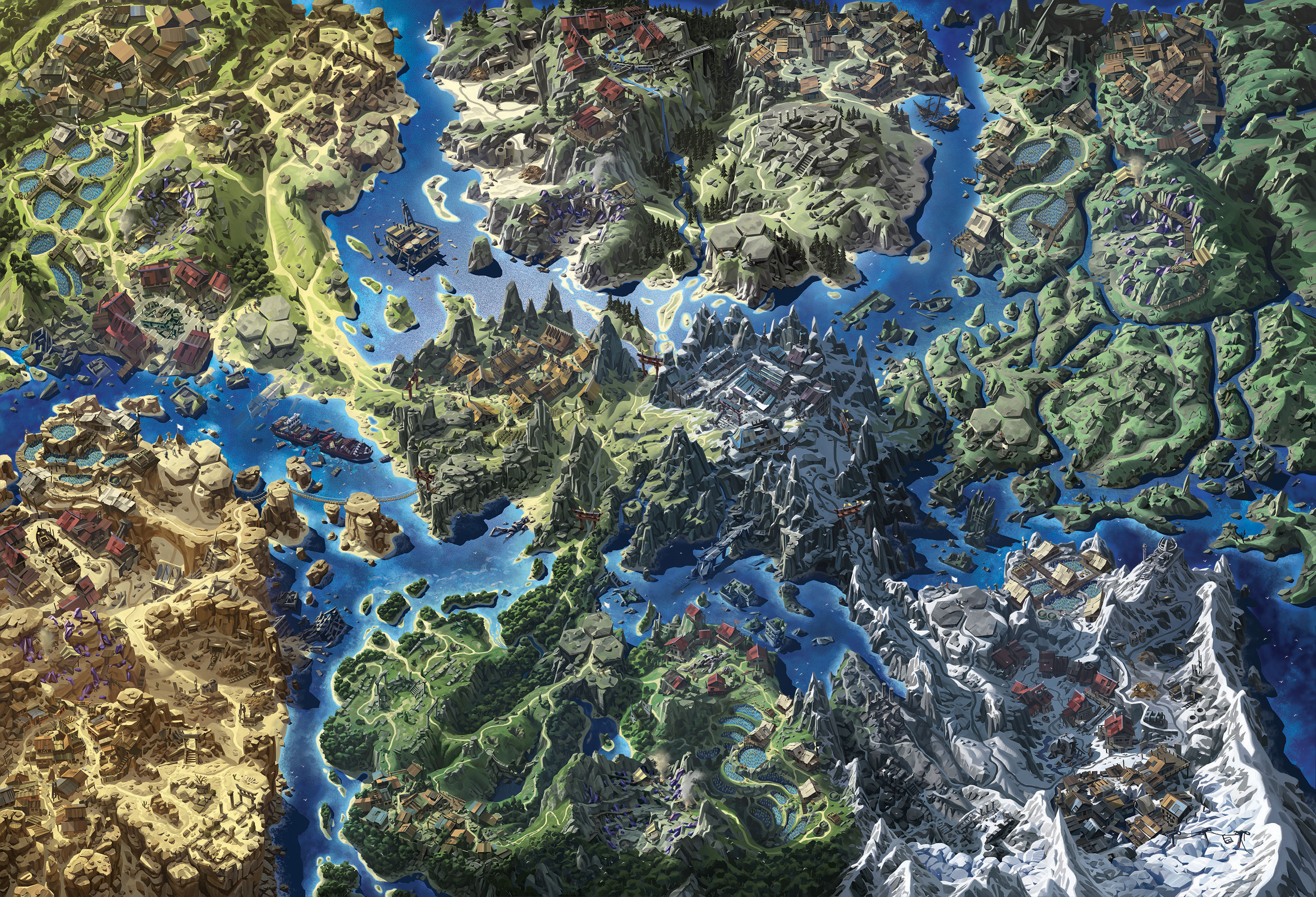 As the name doesn’t suggest, the archipelago of 6 includes 7 islands. Each one of the 6 peripheral islands has its own population to convince to name you Emperor. The 7th island, at the center of the board, is the neutral zone, dedicated to the Emperor.

To Govern or to Scavenge?

Each island has the same graphic layout, only some resources may change from one island to another. You’ll find three main areas:

All the islands are built on this same template and have the same iconography. Knowing one island is knowing them all. 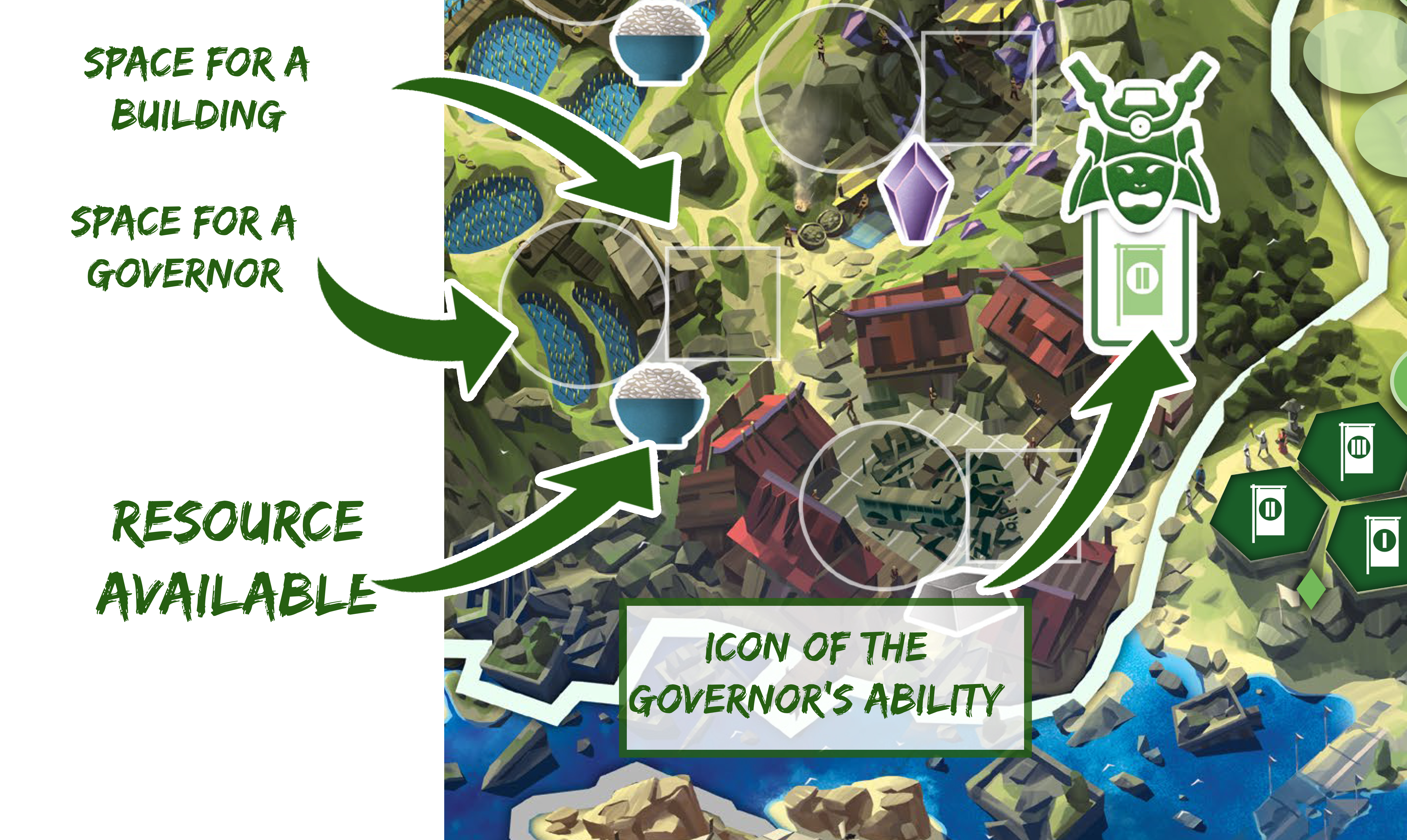 When focusing on the Production zone, you’ll find 5 Production sites that all work the same way:

A space for a Governor

A space for a Building

Each space can only host 1 Governor and 1 Building. A Governor brings 2 Influence in the island, as depicted on the icon showing a flag with “II” Influence under the “Governor” icon.

So, if I place 2 Governors in this island, i’ll get 4 Influence on this very island.

The Rough neighborhood is the place to send your Shadows eliminate the opponents’ Governors. 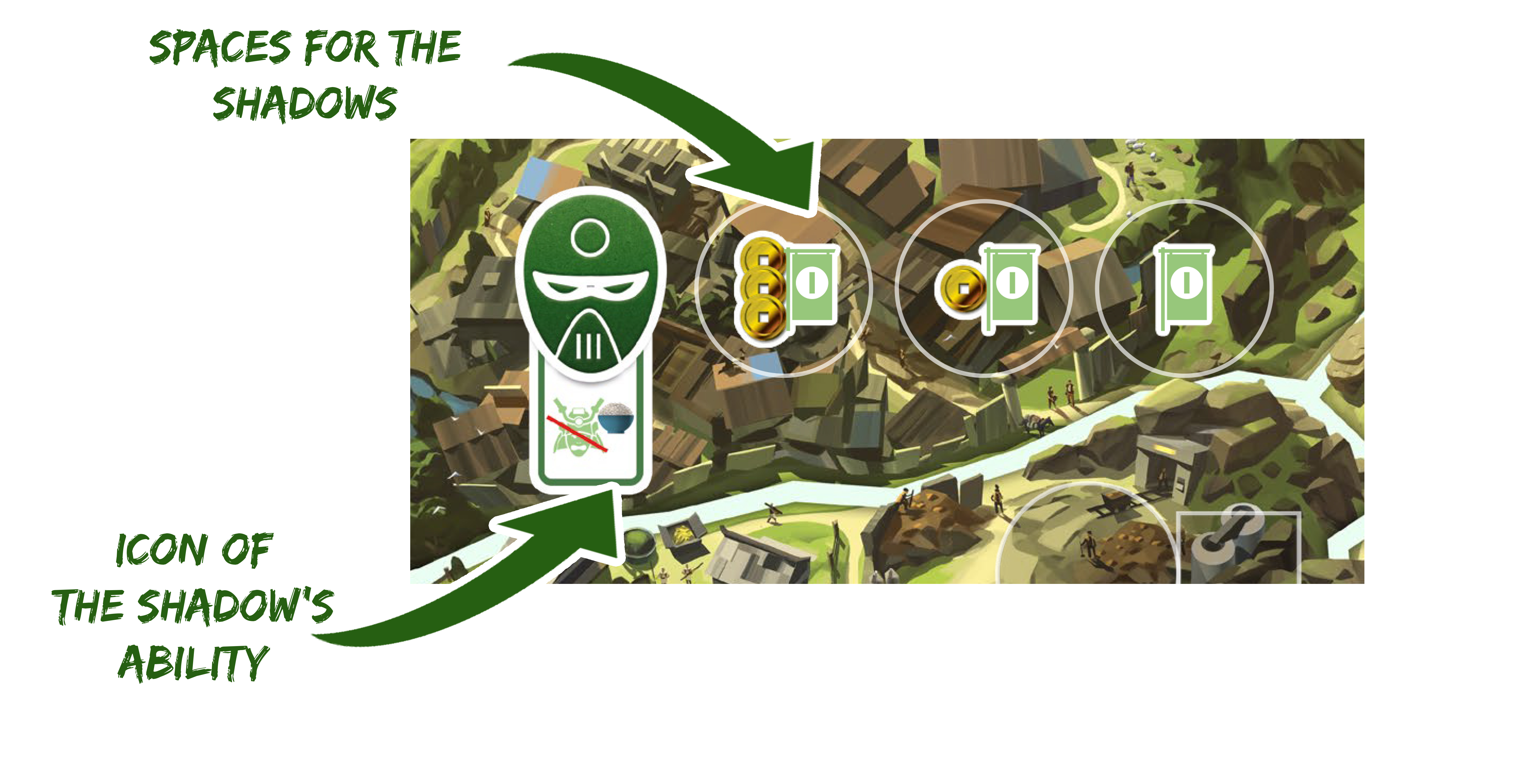 Daimyo is not a confrontation game. You’ll only get 3 Shadows, for the whole game, to use at the right time to win majorities on the 6 islands. Each Shadow can only kill 1 Governor. When a Governor is killed, its owner gains 1 Rice in compensation (as depicted on the icon, below the “Shadow” icon).

Additionally, when placing a Shadow you’ll obtain the bonuses of the chosen space of the board. The first Shadow placed on a given island brings 1 Influence and 3 Gold coins, the second Shadow gains 1 Influence and 1 Gold coin, and the third will only get 1 Influence. If you send a Shadow in the final rounds of the game, its impact on majority will be important but it won’t bring you many Gold coins.

The No man’s land 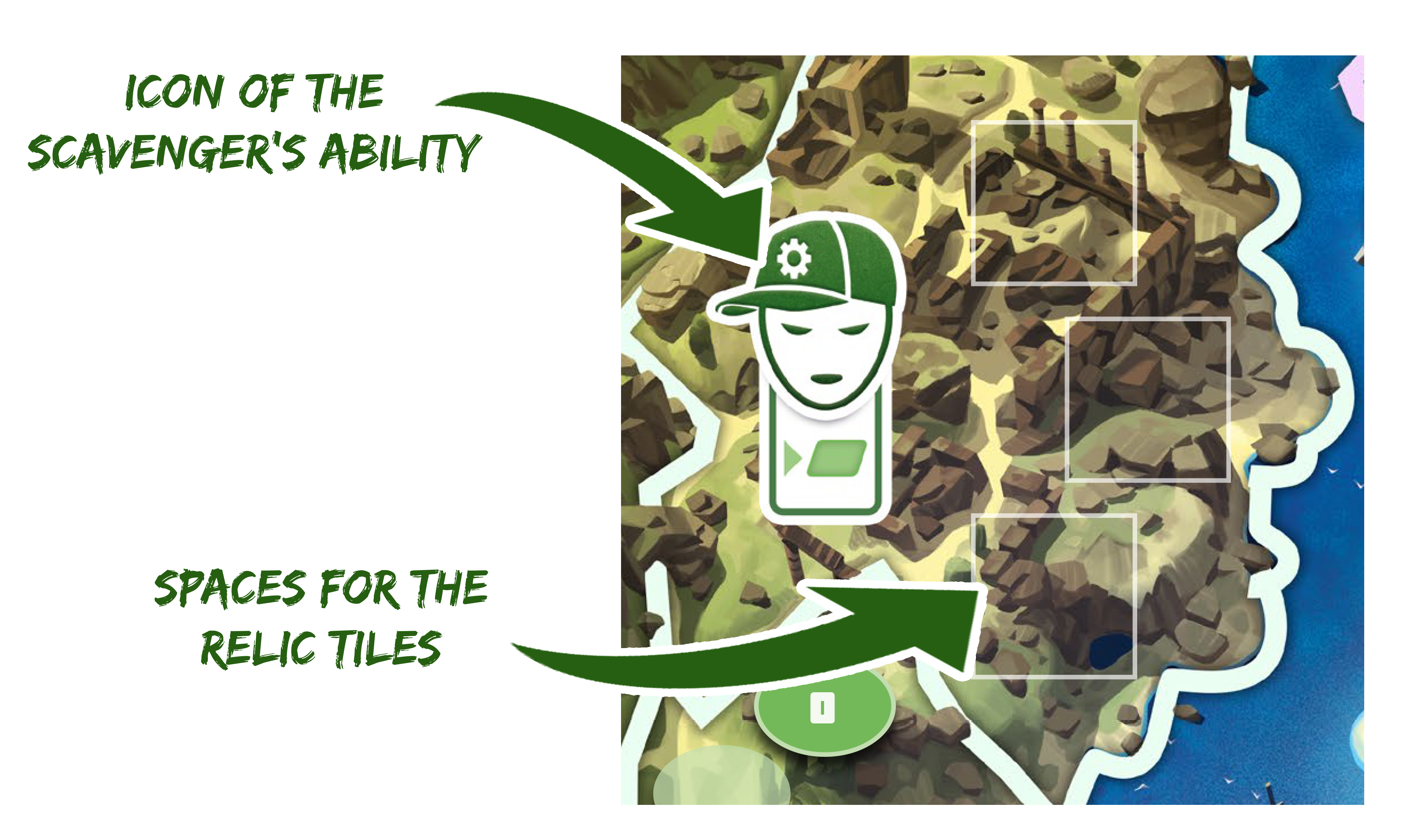 The last zone of every island is the No man’s land.

It’s a kind of Wasteland in which your Scavenger will search for Relics of the past in order to restore it.

In this zone, your Scavenger can collect 1 Relic tile. Each Relic is made of 4 pieces of Relic, and you’ll need to find the 4 parts to restore them.

If you do so, you’ll gain a lot of Influence in the island as the population would be very impressed that you restored the “Holy dishwasher from the past”.

Lastly, each island has an Influence track that will be used to show the presence of each player in this island. You’ll also find 3 altars with icons of 3/2/1 Influence. This is where you’ll place a token of your Clan when you restore a Relic of this island. 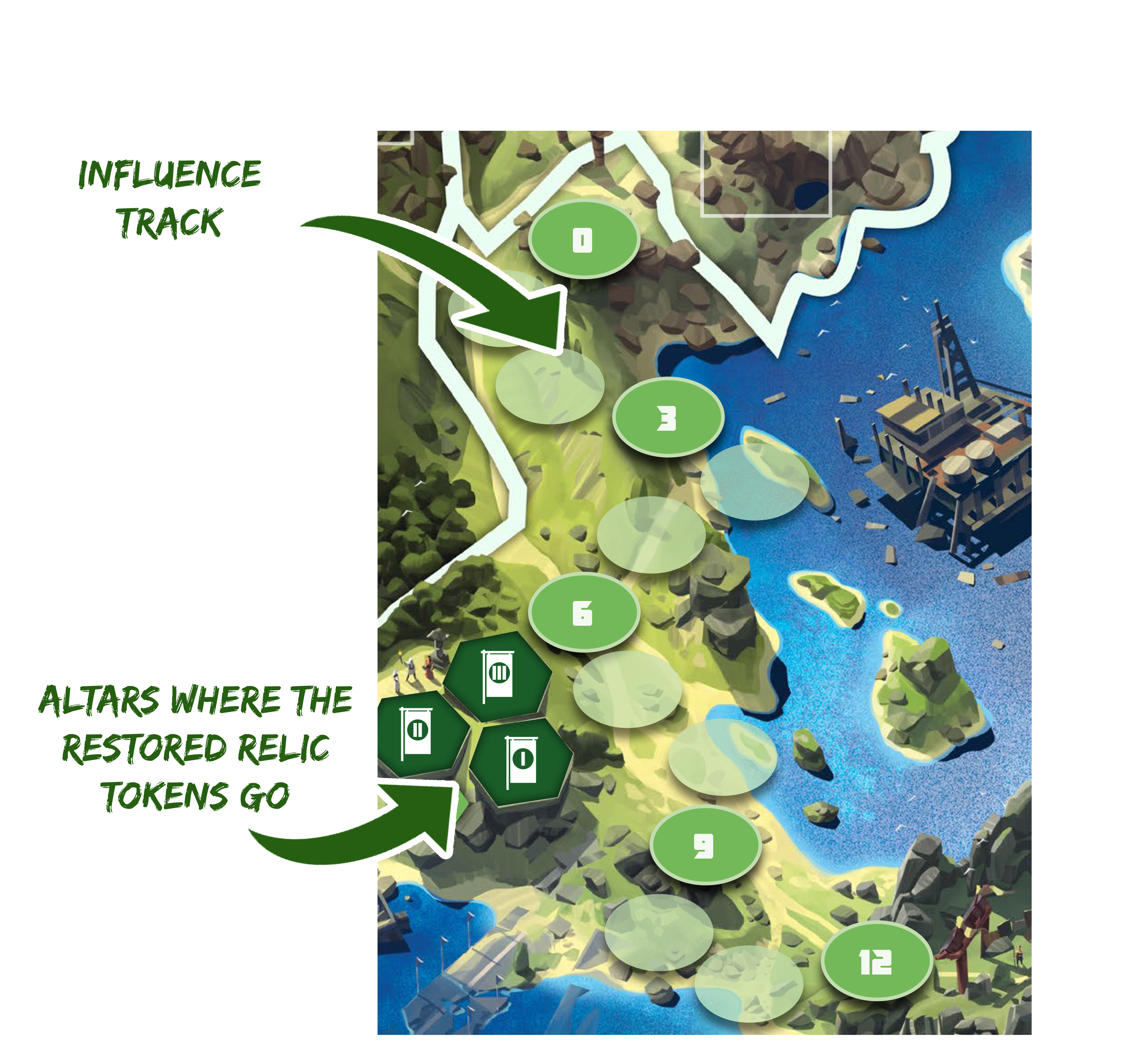 Gaining Influence in many islands will be the key to become the new Emperor. You have many means to do so. Send your Governors oppress…oops help the population; restore Relics from the past; or build Radio towers to spread your propaganda. Use all the necessary means to succeed!

This is the final board. It may seems loaded at this scale but that’s a huge board of 56x84cm and everything clicks well after the first round of play. 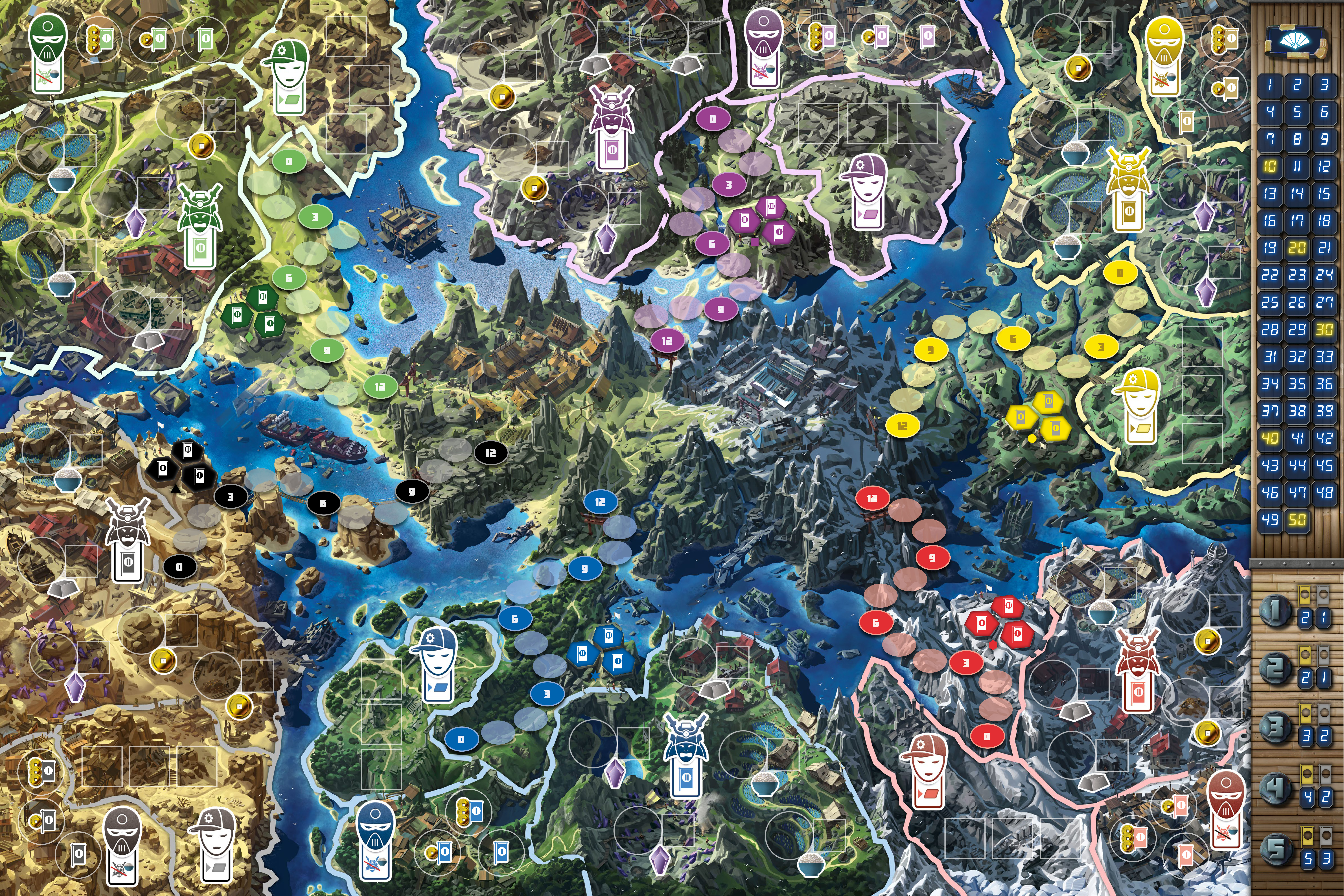 That was the last article before the KS campaign planned for the 16th of July!

[Tactical Guide – part 3] Daimyo, Main board and Influence
We use cookies on our website to give you the most relevant experience by remembering your preferences and repeat visits. By clicking “Accept All”, you consent to the use of ALL the cookies. However, you may visit "Cookie Settings" to provide a controlled consent.
Cookie SettingsAccept All
Manage consent