It’s a Wonderful World will be our 5th Kickstarter project and will be launched on the 14th of May 2019. A game designed by Frédéric Guérard, illustrated by Anthony Wolff, and co-published with Origames. A 1 to 5 player game that plays around 45 minutes. 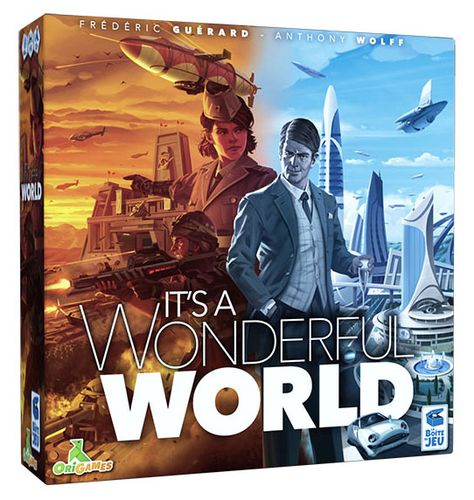 It’s a Wonderful World includes cards drafting*, engine building and resources management mechanisms.
At the head of a retro-futuristic empire, players will develop their empire by building various cards that enhance their production power, to build more cards, to produce even more and so on…

To do so, players will have different card types at their disposal:
• Facility
• Vehicle
• Research
• Project
• Discovery

Each player begins the game with a “Starting Town” card (“L’empire d’Azteka”/”the Azteka Empire” in the following example). This “Starting Town” offers a special scoring bonus (only for the beginner mode) as well as a first production capacity. 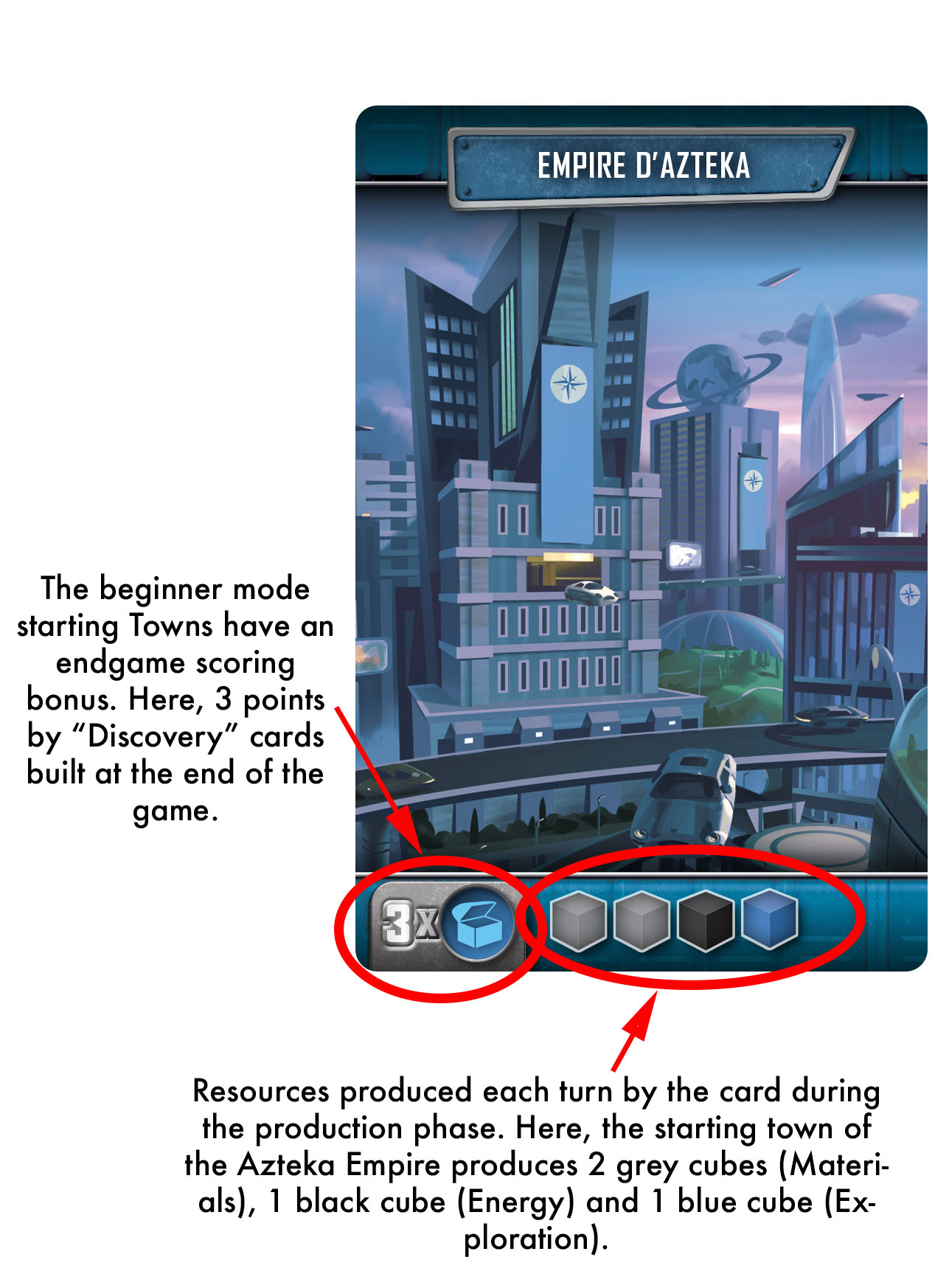 A game is played in 4 rounds, each round being divided in two phases (draft and production). During the draft phase, players will draft 7 cards. Each card has the following information:

Let’s have a look at a hand example during the draft phase:

Among the 7 cards i drew, i choose to draft (i.e. keep) the card named “Centrale nucléaire”/”Nuclear plant”. I place it in my “Draft Zone”. At the end of the 7 picks (when all the cards have been drafted), my play area will comprise my Starting Town: Azteka Empire and 7 cards in my draft area.

You’ll find hereunder the cards i drafted this round. There is the Nuclear Plant that I got on my first hand, as well as the “Base lunaire”/”Lunar base” and “Trésor de Barbe bleue/”Blackbeard’s treasure” that I picked later on when this hand of cards came back to me.

If you’re familiar with the draft mechanism you can then guess the number of players of this game
Before the start of the Production phase that will allow players to produce resources and build cards, each player must choose among the cards in his Draft area which one(s) to place in his Construction area and which one(s) to discard to get the bonus resources (bottom right corner of the card). These bonus resources must immediately be placed on the cards of the Construction area.

In this example, i decided to keep the following cards: “Centrale nucléaire”/”Nuclear plant”, “Laboratoire aéroporté”/”Airborne lab” and “Trésor de Barbe bleue”/”Blackbeard’s treasure”. The 4 others cards I drafted are discarded to collect the bonus resources they offer. I can now put these resources on the cards I kept and placed on my Construction area.
In It’s a Wonderful World, you’ll have to sacrifice some cards to move forward! Among the cards you draft each round, don’t be afraid to discard a good chunk of it to collect bonus resources. By doing so you’ll build cards faster and your production engine will be more efficient earlier. If you keep too much cards in your Construction area, you’ll be quickly overwhelmed!Then comes the Production phase where each Empire will simultaneously produce the resources provided by its Starting town and the cards already built. Yet, your Empire produces its resources in a very specific order. You’ll start by producing your grey cubes (Materials), then the black ones (Energy), the green cubes (Science), then the yellow ones (Gold) and finally the blue cubes (Exploration).

You’ll see when playing and in the following examples that taking this order into account is very important. If you brilliantly handle your productions, you’ll create chain reactions.
Note: I won’t enlarge on this in that article but the Empire who produces the more units of any resource wins a majority bonus.Following my previous hand example, this is my grey cubes (Materials) production during the Production phase.

My Starting Town (the only card i have so far in my production area) gets me 2 grey cubes. I can now place these two cubes on the 2 empty grey spots of my Nuclear Plant. 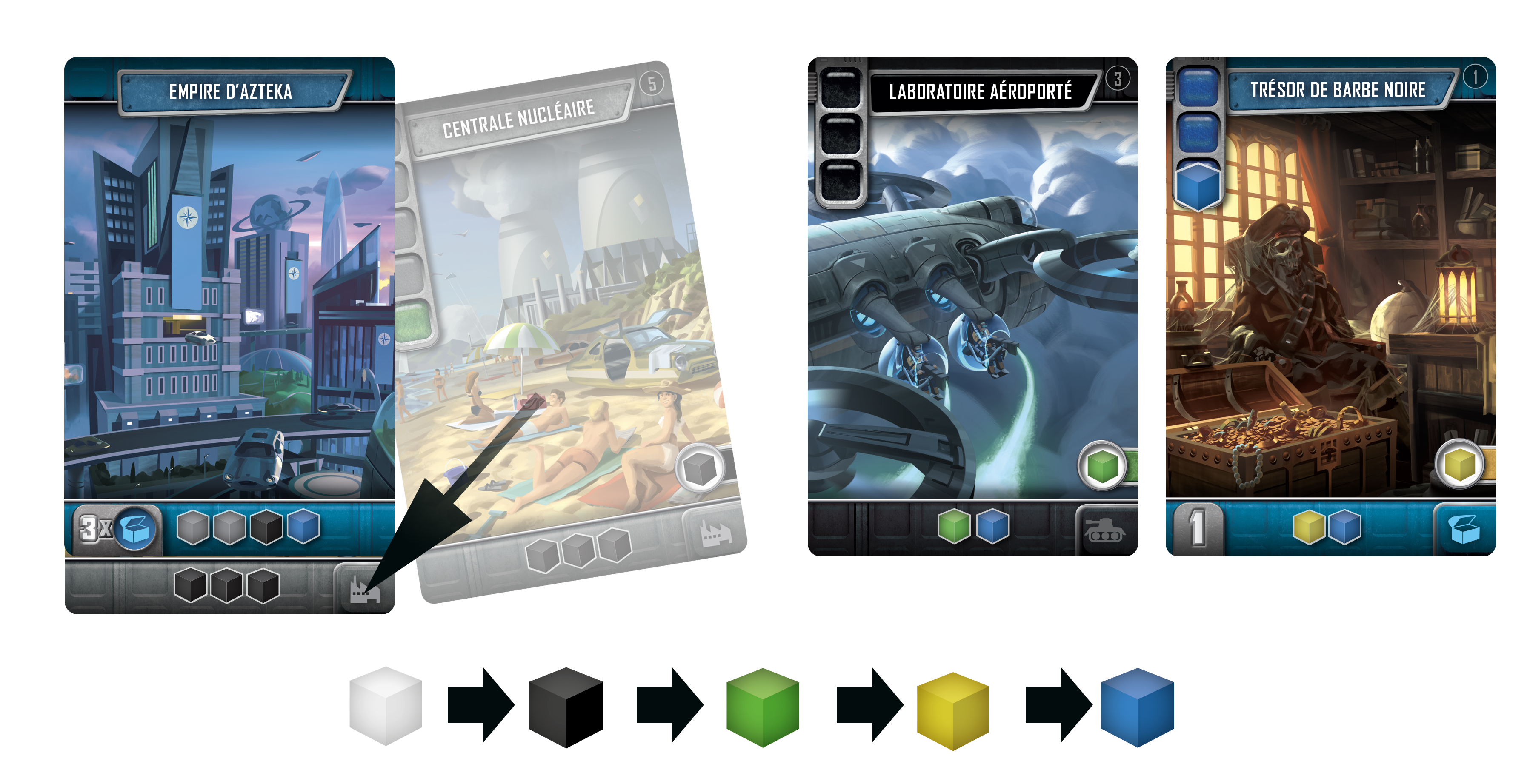 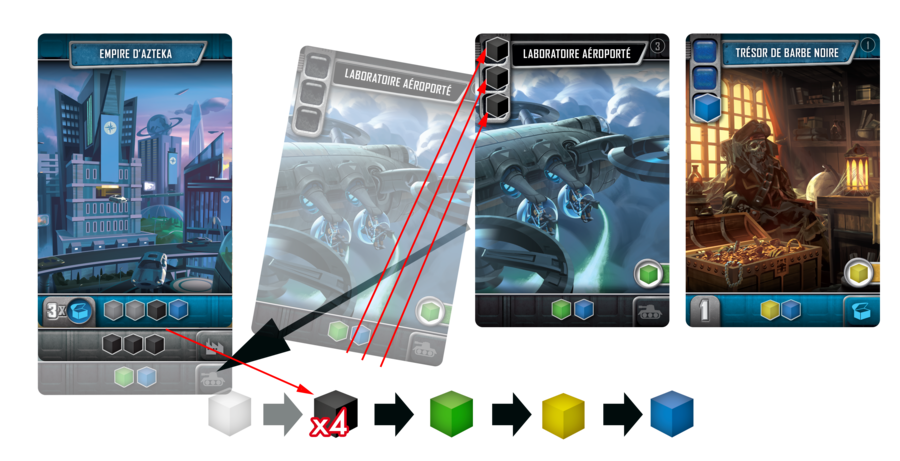 I can use 3 black cubes to immediately build my Airbone Lab and and place it under my Starting Town and Nuclear Plant in order to increase my production. Any remaining unused cube (1 black cube in this case) is placed on a special zone that will grant you joker resources throughout the course of the game.
Any non-built card remains in the Construction area for the next turns. All the cubes placed on a card remain on it until the card is built.So, as you progress in the construction of Facilities, Vehicles, Projects, Research and Discoveries for your Empire, its production capacity will exponentially grow. But beware that 4 rounds is a short time frame!

Now that you understood the mechanisms, can you tell me if i will be able to build the Blackbeard Treasure card on this turn?

This was a first glimpse of It’s a Wonderful World. Obviously that was not an exhaustive presentation of the mechanisms, and I also didn’t talk about how the scoring works. But you now have a good overview of the game.

It will be launched on Kickstarter (with many surprises)on the 14th of May 2019 and should be delivered and hit retail between late 2019 and early 2020.

*The draft mechanism consists in having a specific number of cards in hand, picking one and passing the rest to the player on your left, for example, then receiving a hand of cards from the player on your right, picking one card and add it to the one already set aside, and pass the rest to the player on your left. These steps go on until all cards have been picked and each player has built his own hand of cards.
It’s a Wonderful World – First steps
We use cookies on our website to give you the most relevant experience by remembering your preferences and repeat visits. By clicking “Accept All”, you consent to the use of ALL the cookies. However, you may visit "Cookie Settings" to provide a controlled consent.
Cookie SettingsAccept All
Manage consent